First Assignment for the Globe and Mail 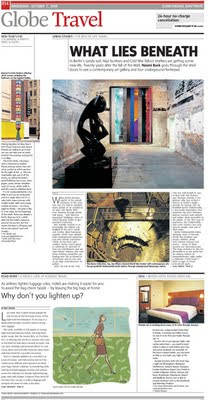 In the ten years I've been illustrating, somehow or other, until very recently, I had never worked for the Globe and Mail. This is a little odd because AGM (my agency) is based in Montreal, and the Globe and Mail is a Canadian paper. I've worked for plenty of other widely circulated newspapers (The New York Times, The Washington Post, etc.), but all here in the states. It's not that the Globe wasn't interested; I've had to turn down several of their offers over the years due to schedule conflicts. When a call came in late last week for me to illustrate a travel article for them, I was thrilled! I accepted the job even though we were on our way out the door for a weekend in Atlanta. Got sketches approved before we left and completed most of the final art in the car on my husband's laptop. Those of you who know me are very impressed right now, aren't you? (I get car sick at the drop of a hat; as a rule I can't look at anything in the car while we're on the road). This time I was so excited about the job that I just decided not to get car sick. I was a little wobbly when we arrived in Atlanta, but felt fine after a good night's sleep. All in all, it wan't too bad.

The article is about traveling without luggage; I posted one of the rejected ideas a few days ago. I'm extremely happy with this image: went for the concept of traveling light, of being as light as a feather.

http://violetlemay.com/artwork/833421_Traveling_Light.html
Posted by Violet Lemay at 11:58 AM

I love your "Traveling Light" illustration. If only our suitcases were indeed that light! Very nice colors and composition.

I love the idea of the stitched suitcase and the feathers was also a nice touch! Really nice illustration!